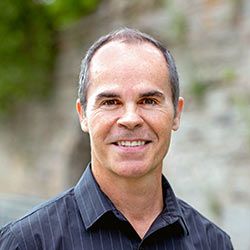 Tom Bates has been an integral part of the Village team for almost 25 years, and during this time has worked on many of our Village series. He came to the company with a strong background in drawing and painting and a real passion for what he does. “I don’t have a favorite Village because each one has its own characteristics that make it exciting to work on. For example, Christmas In The City is challenging because you have to design very tight and realistic. The designs need to represent an existing building or at least appear to be real. North Pole and Snow Village Halloween are fun for the opposite reason, there you can be loose and as creative as you like in the designs. I feel that this type of variety can make the job fun and interesting, I love having that change of pace.”

In 2020 Tom took over the designing duties for Dickens’ Village after the retirement of Barbara Lund. His love of historical architecture and attention to detail makes him the perfect artist for this series. He also designs Christmas in the City , and was the primary designer for Alpine Village.

Along a very different theme, Tom has created designs for the “Nightmare Before Christmas” licensed Village series which celebrates its 25th anniversary this year and has been extremely popular among Village collectors. “This series was designed sketched on paper instead of the computer-generated designs I do for Christmas in the City which requires a tighter footprint with more straight lines. Here I was going for that sketchy look that makes the movie so popular.”

Tom worked to create the spectacular designs for the new licensed series, “Game of Thrones” and worked with other staff artists to get the coordinating accessories just right. His knowledge of the series as well as his technical skill set makes him the perfect designer for the series.

He enjoys meeting with retailers and collectors who give him new ideas and themes to explore and as he tells us is a driving force for his work every day.

Department 56, the leader in lighted collectible Villages, is part of the Enesco family of brands and is based in Eden Prairie, Minnesota.